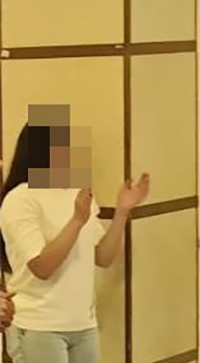 There were quite a number of unbelievers who had also decided to attend our family conference after having been invited by family members and friends. One of these dear ones was a lady called Serai.

Serai had devised to attend as she was genuinely seeking God and seeking for answers, but despite that, she remained skeptical and careful. During the first night, during worship, Serai felt something different in the atmosphere. The sincere and loving fellowship, the unity, the worship, and the heartfelt teaching touched her heart and awoke a longing for God deep within her.

During the second day as Pastor Greg ministered from Isaiah 6 about how Isaiah saw the Lord in His temple, she felt God speaking to her through this message. He said to her that when every false thing she has depended on for support gets wiped away, she will see and experience Him as He is.

During the evening worship session of the second night, Serai felt as if cold water was being poured on her and through her, and joy bubbled from deep within her that she had never known before. She immediately exclaimed that she wanted to receive Jesus as her Lord and Savior.

In front of everybody present, she gave her life to the Lord and was born again in front of our eyes. Serai had been conveyed from the kingdom of this world into the Kingdom of the Son of God. Hallelujah!